Update: Here is a recent article on groundwater salinity in Africa led by this commission’s team members. 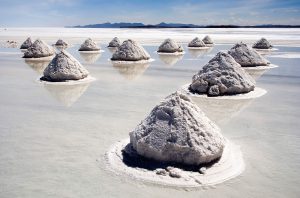 Natural sources and anthropogenic activities which lead to the build-up of salinity in groundwater constrain its use for drinking water, food production and industry. Salinity is a truly global challenge which reduces access to usable groundwater and risks further deterioration through the impacts of climate change and variability.

Due to the widespread occurrence of groundwater salinity and the relative ease with which it can be measured relatively easily in the field or laboratory, it is one of the more widely reported groundwater-quality parameters. Building on initiatives led by IGRAC more than a decade ago, the newly-formed IAH Groundwater Quality Commission has identified groundwater salinity as an early topic area to focus on.

Participate in this survey

We have set out an initial objective to focus on mapping groundwater salinity in Africa, using data from the top 400 meters below ground level, with the goal of undertaking similar activities in other regions in due course or in parallel if there is sufficient interest. To this end we call on members of IAH and others with an interest in groundwater salinity in Africa to join in with this collective effort.

We anticipate this will involve the collation of existing published data sets (i.e. for total dissolved solids and/or specific electrical conductivity), both large regional data sets and those collected from smaller studies. For example, there are several countries for which national or regional scale maps already exist, as well as data sets that have not been published and may be in the grey literature or elsewhere. We will use a rigorous approach to document and quality assure the data sets for inclusion, with the aim to publish the first open-access continental-scale map of groundwater salinity in Africa.

If you are interested in participating please fill out this short survey [English] [French] or get in touch with the IAH Groundwater Quality Commission at iahgqc@gmail.com

Please indicate in your email if you have any data sets that may be considered for inclusion and also which countries these are from. If you would like to lead the effort in a particular country in Africa (or elsewhere) please also let us know so we can coordinate efforts effectively.

We look forward to hearing from you in due course.